The overwhelm epidemic: simple steps to overcome it

Overwhelmed is a word I seem to hear every day. Everyone, it appears, is overwhelmed. Not just busy. Not just frantic. But full-on, overblown overwhelm.

I’m trying to understand what we mean when we say we’re overwhelmed. Is it “Things-are-a-bit-manic-and-I-feel-like-time-is-moving-at-warped-speed-and-I’m-closer-to-death-every-second-but-this-is-definitely-not-what-I-want-written-on-my-gravestone-or-lovingly-referenced-in-my-obituary”?

When I hear of ‘overwhelmed’ I interpret this as “unable to cope”. But cope we do. Until, of course, we don’t.

I’ve been close to breaking point a few times in the last eight years of being self-employed. There was the 18 months when I seriously lost my business mojo after the birth of my second baby. More recently, four and a half months of living in a packed house with my parents and assorted others while we added another storey to our house, followed by three months of living amid builders, mess and chaos while running a business had me running for the bush, laptop on back.

Then there’s the garden-variety chaos that occurs when client projects, launches, courses and other events all conspire towards a clashing crescendo that questions your ability and sanity and threatens your sleep.

If overwhelmed means “verging on inability to cope” but you have to cope because you’ve a business to run and clients to please, here is what I’ve learnt about building your resilience, dealing with overwhelm and regaining your sanity once again. 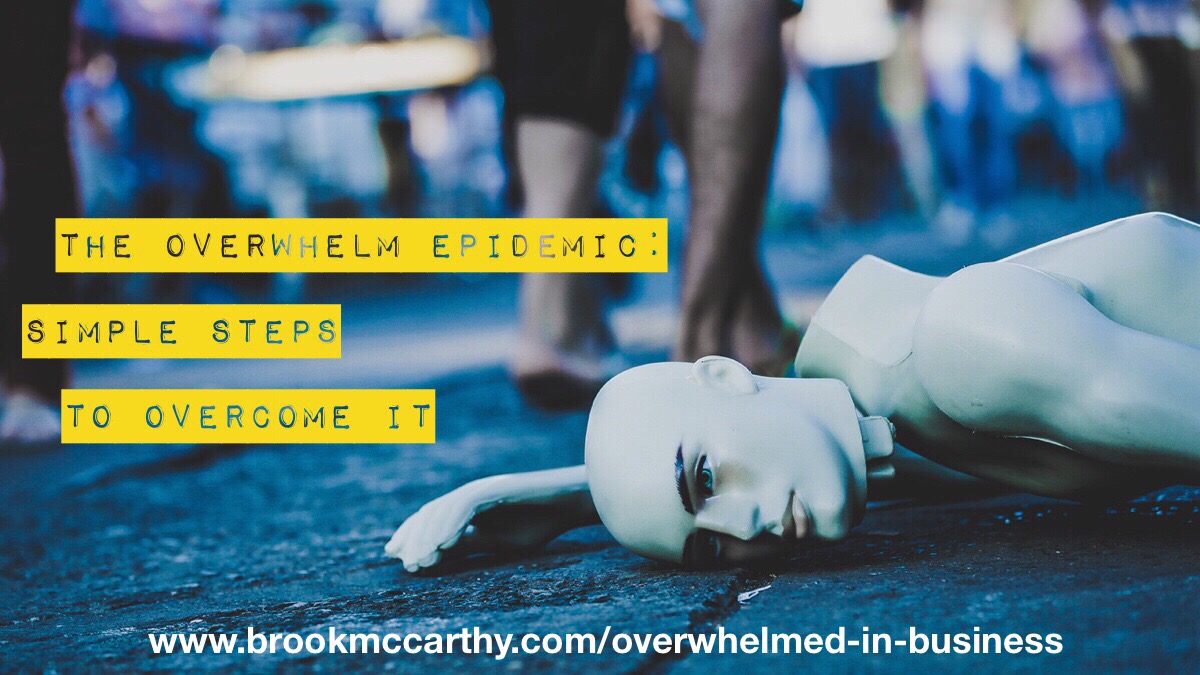 I’m not talking about getting up in what is technically still the night to start work early – give me a break! That’s not going to make you feel better! (Unless of course it does, in which case please carry on.)

I’m talking about being honest with identifying your stress, worry or anxiety earlier rather than later. Denial never helped anyone.

Be honest identifying stress in business earlier rather than later. Denial never helped anyone.

The quicker and earlier you nip this in the bud, the easier it’ll be. Don’t stick your head in the sand and hum a few bars in the hope that whatever is causing you stress will miraculously take care of itself. That’s what children do.

Start by acknowledging your feelings – even doing this can sometimes be enough to reduce a mountain to a molehill.

Our minds make life easier or far harder for us. Or, more specifically, the focus of our thoughts. Monsters of the mind sit on your shoulders whipping you throughout the day, as you attempt to create, communicate, reach out, edit and refine, reiterate and pitch. It can make life hell.

The first step to taking control of your thoughts begins before you go to sleep.

I’ve had plenty of highly stressful periods over the last eight years when my dreams have been hijacked by a recurring loop of worst case scenarios, heinous conversations with difficult clients, and recycled scenes from the previous day that bore me with sleeplessness. It’s neither restful nor replenishing.

Your focus for the day starts the night before: by leaving an adequate buffer between your working day and bedtime. I’m not going to trot out the same-old-same-old suggestions here because we’re all different. Some people find mindless social media scrolling or television very effective for unwinding. For others, it has the opposite effect.

Figure out what works for you. For the love of all things holy, experiment! Novelty makes the world go around and what used to work for you doesn’t always continue to work, especially when you’re synapses are firing.

Identify what you can control

Oftentimes, humans create completely unnecessary stress because they’re trying to figure out the One Right Way of doing things. One Right Way typically involves a bullet-proof order in which Things Must Be Done.

Here’s a radical thought: just do what’s in front of you. Don’t fret over your list. Knock off the first thing, then the next thing. A couple of quick-and-easy wins has the effect of motivating you to keep on keeping on and before you know it, you’re tackling the “hard thing”.

Don’t forget that most of the effort required (and the focus of your mind monsters) is the great unknown of starting. Once you start a task, you’ve effectively halved the stress and effort of continuing. So start already.

In 2004 financial year, I made more money than I’ve ever made before. My workload was intense. Lucky for me, I had a great business buddy and, during this time, we’d send each other an email every Monday morning highlighting the top three tasks we had to get done that week.

The breakthrough here wasn’t in her response to me – it was the practice of writing down what I was doing and sharing this with a buddy who was listening and supporting from afar.

Writing that list made me feel a little stressed, but this was far outweighed by my awe in what I had to do and my ability to do it. No wonder I felt stressed! The brief pause of composing each week’s email enabled a feeling that not only was my stress justified, but also that I was more than capable of getting stuff done.

Learn how to get better at stress

Being self-employed means we can’t necessarily afford to take a week or two off to the Bahamas to ease our stress in hammocks with a cocktails or three.

Is it possible that the secret of life could be how we can work hard at something without accumulating ‘bad’ stress? Because not all stress is created equal and, contrary to popular opinion, stress isn’t the enemy – it’s our attitude to stress that’s harmful.

Between so-laid-back-we’re-almost-comatose and the famed ‘fight or flight’ response, there’s a breadth of behaviours and stress. Stress is our ally in intense times: it primes us for optimal performance and encourages behavior that helps, not hinder.

The stress hormone oxytocin enhances empathy and affection, priming us to do to do things that strengthens close relationships. It protects us from deleterious effects on stress, helping blood vessels heal from any stress-induced damage.

Building our emotional resilience – so that we’re far less likely to feel overwhelmed and instead simply feel busy – helps us both handle stress better and recover faster from stress.

As health psychologist Kelly McGonigal, author of the book The Upside of Stress puts it, when we see stress as helpful rather than harmful, we create the biology of courage. We trust in ourselves to handle life’s challenges, in part, because we know we don’t have to face them alone.

If there was one single thing I’d do differently if given the opportunity to start my business over again, it would be to reach out far earlier than I did, to seek community, support and allies in self-employment.

We don’t have to feel overwhelmed. We simply need to build the resilience and self-compassion to reframe the way we approach our work.

The overwhelm epidemic: simple steps to overcome it